When we planned for the trip, my mallu friend told me that if we get time it is worth visiting Alapey and taking the backwater ride to kottayam in a boat. So Alapey was in our list and Kerala is famous for backwaters. The penultimate day of the trip started off with a bus ride to Alapey. We met Unni at the Chalakudy bus stand and he got us in to a Palakad bus which goes to Alapey. That was some solid 2.5hrs of travel from Chalakudy to Alapey and it was around 11.30 types when we reached there. We just got down somewhere in the town and just walked down the streets looking for some information. We hit a tourism office where we came to know that the ferry boat to Kottayam had left and the next one is around 1.30. The tourism guys were also giving some gyan sessions to couple of foreigners…Sure they made some good money that day.

The town had lots of foreigners and also people from different parts of India. Alapey is famous for the oil massages and that is one of the main attractions there. There are these government ferries available at cheaper rates which is a main mode of transport for localities there. Also there are private boats that you get which starts at some 500. You can hire these for your family and have a good ride in the backwaters. Yeah you know which one we took…The government ferry is pretty decent enough and when we reached the ferry station the ferry was almost full. We decided to do a foot-board in the ferry… 🙂 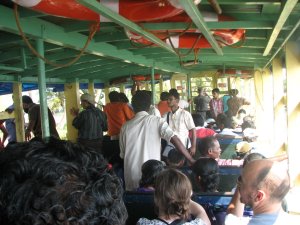 We could do a foot-board only near to the engine side of the ferry as the other foot-board was already occupied… 🙂 There was quite a good sound coming out of the engine and there was this weird smell of the fuel that gets burnt (The kind of exhaust smell that comes out when you burn impure fuel). That didn’t matter much to us as were enjoying the ride. It was solid three hours ride from Alapey to Kottayam through the backwaters. As we continued our journey we were surprised to see so many small towns(islands) in the backwaters. People live there just like how one would live in a small town with all the facilities like cable TV, telephone and we even saw a Maruthi 800 parked in one of the houses. We were wondering where they would use this M800. I guess they would take the vehicle in a ferry to Kottayam and drive from there… 🙂

The other thing that would surprise you is the house boats. You get house boats of all sizes and there were like hundreds of them at one stretch. This is the main attraction there as lots of honey moon couples hire these house boats.

We did see some families probably celebrating their anniversaries and foreigners taking a nice break. I have been in a house boat before when I was in Sydney and know the experience. But here we saw a house boat with a Split AirCon. That was heights and anyways needed in hot county like India. These boats are really huge in size and you get couple of people who would drive the house boat. The one we hired in Sydney is a self-driven one where we did all the driving/mooring/anchoring stuff. These driver guys themselves would do the cooking/cleaning and other stuffs. You just gotta enjoy your time with your loved one(s)… 🙂

The entire ride has enough opportunities to click lots of pictures and I was busy with my camera while Rukku was enjoying the ride (probably getting bored too:))…As we were nearing Kottayam we could see massive agricultural land on the other side of the backwaters and such a plush green sight it was. 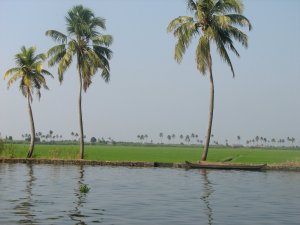 You will know why Kerala is called God’s own country… We reached Kottayam at around 5.30 and we were damn hungry as we didn’t have lunch too…It was just Kerala chips and good day biscuits for lunch…As we approached the Kottayam bus station we sighted a restaurant and send some parotas inside…We ordered some tea and we got in such a big glass…We never had so much of tea in one shot before…And then it was solid 45 minutes of waiting to get a bus to Chalakudy… There was one guy standing next to us and we first asked him if that bus standing in front of us would go…He said no and we asked him to let us know when Chalakudy bus comes in. When 10th bus came there it was like we turn to our left and he would nod his head saying a big no. We tried hard not to piss him off, but we didn’t care too. At last he nodded vertically and we got in to the bus. We double checked with the conductor to make sure he hasn’t got us in to a bus that would go in opposite direction… 🙂

We reached Chalakudy at around 9.30types and went in search of something to eat. The entire town shuts down at 8.30 or so and you don’t get anything to eat…At least thats what we could conclude…If you don’t get anything to eat near the bus stand, then we understand that the city shuts down. There was a highway near the bus stand itself and we walked down there and found a local hotel. We ate whatever we could (mostly dosas) and that was our final dinner in Kerala…We didn’t realize that our trip was coming to an end with the marriage that we gotta attend next day at Thrissur and we still don’t have tickets in our hand for the return journey. We had given some 1000Rs to Unni and he said it would be done. We were hoping that somehow we would reach Chennai on Monday morning as I had to go to office on the same day…