We boarded the cab that was booked for us at around 7.30 IST (IST means an assumed delay of 20-30 mins) and headed straight to Top Slip. The driver was a nice person and he really works hard for a living. He has been driving for continuous 12hrs and took a 4hr nap and started again to take us and roam around the whole day!!! We reached the toll booth at Top Slip and we were the 8th cab to enter tat day. There is a cap of 30 cabs that can enter beyond Top Slip in to the Parambikulam forest. As such we were told that there are couple of places to see in Top Slip but Parambikulam is a lot better place and a whole day can be spent inside the forest. So we drove further and reached the Parambikulam check post. 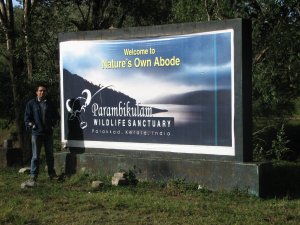 We just could register there and couldn’t proceed further. As per the new rules they allow some number of vehicles every 30 minutes and for the whole day they allow only 30 vehicles. This is the new order by the forest officer to protect the forest.

So we registered there and came back to Top Slip and went straight in to the canteen to eat something. The canteen had only one item and that is Pongal. We were told that if we need any food we gotta order them a day before. Anyways, we ate whatever was available and spent some time there watching some wild pigs grazing around and reached the Parambikulam check post on time. We payed the toll and drove in the dense forests to reach the reception office. We paid few more hundreds and got a guide there (guide is mandatory!!!). The guide accompanied us throughout the day and showed us places around. We drove in the forest and on the way we could just see some deers and crocs. Actually the guide told us the best time to see the animals is early in the morning as they would come out to drink water. We drove few more KMs and reached a place where there was a tree called Kannimara Teak. That’s one of the biggest natural teak trees in the world measuring at 48.5mts in height and the girth is 6.5mts. Like, it would need 7-8 people forming a chain to cover the tree in a circle. 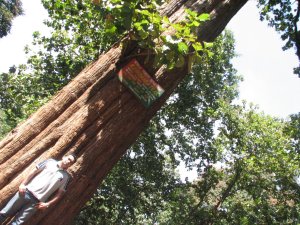 And the myth behind the tree is that there used to be 7 more such trees which were actually angels are something and this the last one of them surviving. Even this was supposed to be cut down, but blood was oozing out of the tree when the axe fell and they stopped cutting it down. And from there on it has been standing tall for 100s of years.

After spending some time there, we reached a check dam and the guide told us that this is a small dam and you have the second largest dam in India few KMs from there. We stopped here and there to find some animals that could be spot but we were terribly unlucky. But still we continued with some hope. We had lunch in between in a hotel known to the guide. And the best part is, they do not eat curd because no cow is available inside the forest. Yeah, if they bring up any cow it would be eaten by the animals that would roam during the night. After lunch we went to the boat house to take a boat ride. There are no motor boats available for tourists and we have to go only in the bamboo boats. 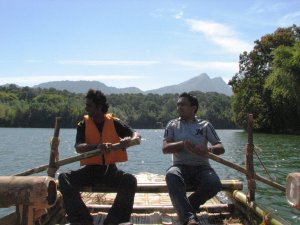 This is a measure taken to keep the water pollution free. In fact we drank the water directly from the storage and it was just too good!!! Was thinking the kinda treated water that we get in the city 😦 The guys who were driving the boat were telling stories on how the forest is damaged for some few thousands of money. Like every year the government allots some amount to protect the forest from wild fires. This forest is being shared by both TN and Kerala government. These guys were showing the area that belong to TN where the forest was in black color because the forest officers just ignite fire every year intentionally and show it as a natural wild fire and get the amount from the government. We were hearing such kinda stories during the ride that took us some one plus hour. Obviously we rowed for some time 🙂

After this we went to the main dam and it was a mind blowing sight there. It was such a huge dam and there was so much of water around. This dam was conceived in the late 60s by then TN CM Annadurai to save the southern TN from water shortage. We were amazed at the kind of vision this person had. He constructed a huge dam 5 decades back to save people in the future!!! And the guide was explaining us how a rail track used to be there where the dam is currently. The brits used it to transport woods from the forest!!! In fact from the dam, there was water gushing out and it was just the seepage. 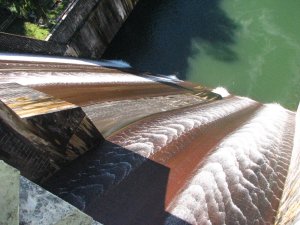 We just couldn’t imagine how much water would be coming out of the dam when it reaches full level. We were told that every year the dam gets full and so much water is released that it goes above the distant bridge that we could see from the dam (Check the bridge in the pic…) In fact the guide tried to get the keys of the dam so that we could go inside and check the generators and instruments inside and he was telling that it would be too chill inside (naturally, without any A/C). But we couldn’t reach the guy who had the keys (lady luck was never with us)

Well, after doing all these things, we gotta know the actual thing one is supposed to do at Parambikulam. You gotta book a log house for two days (Call them 2 months in advance and book it). You reach there on day one, take a boat, a guide and two security guards with you to the log house in a boat. These log houses are situated in islands in the water body. You stay over night there, the guides themselves would cook food for you. After past midnight, you start on a night safari with the guide and the security guards (who will have guns). You go inside the forest and you can see all the animals that would be roaming around. There are more than 350 leopards, lots and lots of elephants and all wild animals. You do the safari whole night and come back to the log house in the morning, take nice food and rest and do some more boating in the water body and leave the place. We got the contact numbers of the guides and reception and lots of info about the place and phew it was such a experience!!! We decided to come back for sure and stay in the log house sometime. My friend said he is planning his honeymoon there…(getting wild in the real wild :D)

We came out of the forest by 5 O clock types and did some shopping in the eco shop there and came out of Parambikulam to reach back Top Slip. We spent another 30 mins of our time there as we were supposed to get out of the check post before 6. As we drove past the check post, we had started singing “Vaalpaarai, vattaparai….” 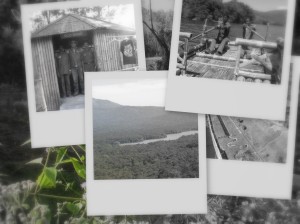